By area, France is 42nd largest country in the world, and 3rd largest in Europe. With its countless tourist attractions, France becomes the destination of thousands of honeymoon couples and businessmen every year. The fun seems to be never ending in this land of beauties.

Let us explore which are the top 10 best & most famous historical places in France. I am sure this list will be not less than a gift for historians and students. So, let us not waste any more time and start the list! Pont Alexandre III is one of the most beautiful bridges of Paris. Its foundation was laid in 1900 and it has crossed the Seine from Le Grand Palais to Invalides. The elegant design and beauty of Pont Alexandre III make it a worth see tourist point. The design contains the marvelous elements of Art Nouveau, and is featured in Woody Allen’s Midnight in Paris. The bridge has been constructed on the theme of arm celebrations of France and Russia, with the Nymphs of the Seine and NevaRivers. The Invalides is approachable by both M8 and the M13. The Latin Quarter of Paris (also known as Quartier Latin) is situated in between the 5th and 6th arrondissements of Paris, on the left bank of the Seine, around the Sorbonne. It is best known for its student live, amazing environment and bistros. The Latin has been the hub of higher education establishments, such as the École Normale Supérieure, the École des Mines de Paris, Panthéon-AssasUniversity, the Schola Cantorum, and the Jussieu university campus, in addition to the École Polytechnique. Latin Quarter of Paris has taken its name from Latin language since the time of language learning in Middle East. It is a famous epicenter of Parisian academic life, having six universities and technical schools. You can go there by M4 Saint-Michel’s stop at the top of the boulevard, close to Seine; the M10 Maubert. 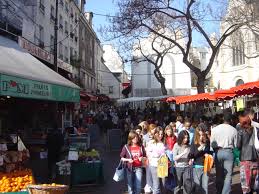 This has been constructed along one of the routes of ancient Roman Road. Today, it is a favorite tourist point, with amazing atmosphere that lets tourists visit its lively street market. The market remains open daily except Monday. The Rue Mouffetard market was once situated near to the apartment of Ernest Hemingway. Its roots stretch back to the times of 1350AD, and it has remained a famous street market of Paris. It stretches along the south half of the street, having colorful shopping centers, malls and outlets for the tourists. Here there is no short of delicious food points.

Shakespeare and Company Bookstore is one of the most famous independent bookstores of Paris. It tracks its history back from 1919. It is known as one-time haunt of literary icons like Ezra Pound, Ernest Hemingway, James Joyce and Ford Madox Ford. The bookstore was originally situated on Rue Dupuytren, before its movement to large premises of Rue de l’Odeon in 1922. Finally, it was moved to Paris in 1941 during the times of WWII German occupation. The bookstore is run by George’s daughter Sylvia (named after the original proprietor). It is the hub of book lovers, with two floors having lots of classic volumes, second hand novels and modern titles, as well as other interesting books. The bookstore was opened by American ingénue Sylvia Beach, who turned the sop into a creative haven form where writers used to congregate for sharing their ideas. Sylvia has been known for the historical publication James Joyce’s 1922 Ulysses. It is situated in the art district of Paris’ Left Bank. Vieux Tours is one of the ancient city centers of France. It is also called Vieux Tours, and is a medieval-era winding street area. Here you can find a lot of quaint shops, bustling square (also called Place Pumereau), cafes, restaurants and half-timbered homes. These homes date back to 14th century. Here you can find a lot of wonderful things to get amazed with. City’s one point has slated to tear. When you are here, don’t forget visiting St Gatien Cathedral, the weekly market in Place Jean Jaurès, and the garden of the Musée des Beaux-Arts. This is the area where the cedar tree was planted by Napoleon Bonaparte. Here you can also view stuffed elephant which was structured in 1903.

4. Towers of the Notre Dame Cathedral Notre-Dame de Paris is also famous with the name of Notre-Dame Cathedral, and Notre-Dame. It is one of the marvelous historical catholic cathedrals of France. Notre-Dame de Paris is situated in the east half of the Île de la Cité in the fourth arrondissement of Paris, France.The cathedral is an excellent example of French Gothic architecture, and is also known as a famous church building not only in France but also all over the world. Here you can view several sculptures and stained glass that date back from earlier Romanesque architecture. Notre-Dame Cathedral is located on L’île de la Cité, which an island of the Seine River. You can approach it via Métro lines: line 4 (Saint-Michel), lines 1 & 11 (Hôtel de Ville) and line 10 (Maubert-Mutualité).

The Trocadéro area is one of the most famous tourist points of Paris. It has been constructed with a large square and is incorporating several museums. Trocadéro has been dominated by the Palais de Chaillot, a neo-Classical building that dates back from the 1937 Exposition Universelle. It was designed in two wing forms which give a framing view of the EiffelTower across the river. The palais is incorporating the Theatre National de Chaillot and four museums. To reach Trocadéro, you can take metro on lines 6 and 9. Another way is to wander across the river from the EiffelTower.

The Château de Vaux-le-Vicomte is an interesting tourist point. It is actually a baroque French château located in Maincy, near Melun, 55 km southeast of Paris in the Seine-et-Marne département of France. Château de Vaux-le-Vicomte was constructed in 16th century, during 1658 to 1661 for Nicolas Fouquet, Marquis de Belle Île, Viscount of Melun and Vaux, Louis XIV. The château is considered to be a highly influencing work of architectures of 17th century of Europe. At Vaux-le-Vicomte, the architect Louis Le Vau, the landscape architect André le Nôtre, and the Charles Le Brun had collaborated with each other on a big project. It is about 34 miles southeast of Paris. You can reach there by train from the Gare de Lyon to Melun, then by taxi.

Villers-Bretonneux is one of the important stops of Australian Remembrance Trail of the Western Front, which is actually a famous route for tourists to come and learn interesting things about the country and its struggles during World War I. The Australian National Memorial reminds the April 24, 1918. The memorial has lists of more than 10,000 soldiers from WWI which weren’t given any grave. Villers-Bretonneux has the Franco-AustralianMuseum, located in the VictoriaSchool. It is one of the most iconic buildings of the village. The memorial has set for ANZAC Day events in France annually on 25th April. The Franco-AustralianMuseum remains closed on Sundays and on Christmas. The rest of the days, it opens from 9:30 a.m. until 4:30 p.m. from November to February and 5:30 p.m. the rest of the year.